For many end users, there is little difference in the basic appearance of sheet and plate – both are relatively wide, relatively long flat sheets of metal. However, within the steel production process there are two distinct process routes utilised.

Sheet is typically used to describe thinner items, from 6mm (1/4”) down to less than 1mm (3/64”). For commodity carbon and stainless steels this assumes large-scale casting of slabs that are then reduced in thickness by a series of rolling processes. Before hot rolling, the slab is heated to its plastic deformation temperature then worked between pairs of rollers to the desired thickness. The original cast, coarse grain structure of the slab is broken down and replaced by finer grains, improving toughness and ductility. As the strain is applied in one dimension only (so-called ‘plain strain’) the reduction in thickness results in a subsequent increase in length. The original slab becomes too long to be handled as a flat item, and so it is wound-up into a coil. Further processing is possible after hot rolling, such as: 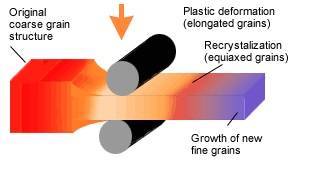 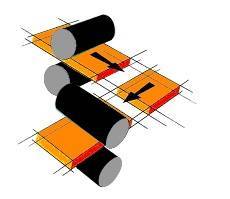 A similar hot rolling process is also used to produce plates – where the main difference is simply the thickness of the finished piece. Rather than use a series of rollers, one pair of rollers might be used repeatedly to reduce the thickness, which is called a reversing mill. For some grades, either the composition or the market requirement mean that the starting point is a singular ingot rather than a series of many continuously cast slabs. For such thicker pieces, this simpler process configuration can result in a lower conversion cost, producing items from 6mm (1/4”) up to 250mm (10”) or more.

Particularly for thicker pieces where the level of grain refinement is less, the difference in properties across and along the plate can be appreciably different. Therefore, Langley Alloys prefers its products to be manufactured via a cross rolling process. Here, the plate is repeatedly turned by 90 degrees through its rolling programme, giving plates a greater uniformity of microstructure and properties in the transverse and longitudinal directions.  This can aid cutting, fabrication and result in more efficient component design.

Traditional plates are often supplied in industry-standard sizes (i.e. 12.0m x 3m / 39’ x 9’), which can then be cut-down to size – Langley Alloys operates its own water-jet cutter, producing a high quality finish with no undesirable impact on metal properties from high heat inputs.