The Chemical Processing Industry (CPI) encompasses a broad range of products, including petrochemical and inorganic chemicals, plastics, detergents, paints, pigments and more. Given the specific nature of individual processes, we focus here on the production of phosphoric acid – a key precursor in the large-scale production of fertilisers and agri-chemicals – but there is some commonality between the process conditions experienced in other acid-based processes.

Phosphorus is an essential plant nutrient and is taken up by plant roots (usually as H2PO4-which is derived from phosphoric acid, H3PO4). Therefore, the manufacture of fertilisers depends on the availability of supplies of phosphoric acid.

Phosphoric acid is made by two processes, either the so-called ‘wet’ process or the ‘thermal’ process. Phosphate rock (fluorapatite) is the predominant source of phosphorus and is mined in countries such as Brazil, South Africa, Morocco, Jordan and Algeria, which explains the heavy presence of production facilities in some of these regions.

Here, phosphoric acid is produced from phosphate rock by reacting it with concentrated sulphuric acid in a series of reactor vessels. This results in phosphoric acid and calcium sulphate (gypsum) together with smaller volumes of impurities from the mined rock. Water is added and the gypsum is removed by filtration along with other insoluble materials (e.g. silica).

The product from the ‘wet process’ acid is impure but can be used in the fertiliser manufacture process. Alternatively it can be concentrated to create a liquid fertiliser. Typically, this impure acid is purified further when producing phosphates at large-scale to ensure undesirable elements (i.e. heavy metals) are removed.

Here, phosphorus is burnt in air at elevated temperatures and passed into a hydration tower where the phosphorus oxide gas is absorbed into a phosphoric acid solution. This is a more energy-intensive process as you have to initial produce phosphorus, before converting it to acid, although it will produce a more concentrated and purer solution. Given the main application in fertilisers and cost-sensitivities the wet process dominates.

The phosphoric acid production process poses engineers and plant designers with a variety of potential corrosion issues at various stages of the process:

Uniform corrosion from impurities (HF, H2SiF6 etc.) – within the reactors – the ‘Attack Step’

Digester tanks have been historically constructed from stainless steels such as Alloy 316L, with rubber- or brick-lining selectively applied at the bottom of the tank. However, super duplex steels, and specifically Ferralium were specified in significant quantities from the 1990’s onwards and have provided excellent service.

The ground phosphoric rock is mixed with water to form a slurry that can be easily pumped into the digester for reaction with sulphuric acid. Such a slurry will lead to erosion corrosion unless appropriate materials are specified.

Ferralium is widely specified in pumps and valves due to its combination of corrosion resistance and mechanical properties. In addition, it is commonly used in the construction of agitators, for both the shafts and blades. The blades can be more easily replaced than the shafts and other elements of the unit, but the unique properties of this super duplex stainless steel help to increase operational time. Alloy 904L is also used for this application, but is less cost competitive.

Ferralium has been used in evaporators as tank heads, where the parent metal provides equivalent or better performance than lined alternatives, with simpler construction, lower cost and less potential for maintenance. Similarly, it provides good performance in condenser units also.

The filtration step can be relatively overlooked with respect to material selection in comparison with the digesters – as the perceived level of corrosion is deemed less compared with the steps involving concentrated acids. Localised crevice and pitting corrosion from scale formation during the digestion reaction and filtration stages of phosphoric acid manufacture can be a major concern for production facilities. Field tests in a Lamella decanter containing 40% P2O5 solution show that Ferralium has a corrosion resistance more than 5x better than Alloy 904L and 2x that of Alloy 316 stainless steel under these conditions.

Localised corrosion due to chlorides

Ferralium has a superior corrosion resistance to many other metals in chloride-containing media at most concentrations, including both Alloy 904L and 3xx series austenitic stainless steels It also has a lower threshold chloride content for the initiation of localised corrosion; consequently, it outperforms these alloys in the hemihydrate process where operating conditions are harsher due to the higher temperature and lesser rock quality requirement of this process.

The iso-corrosion curve shown below highlights that Ferralium outperforms a large number of austenitic, duplex and super duplex stainless steels in sulphuric acid at all concentrations and temperatures. 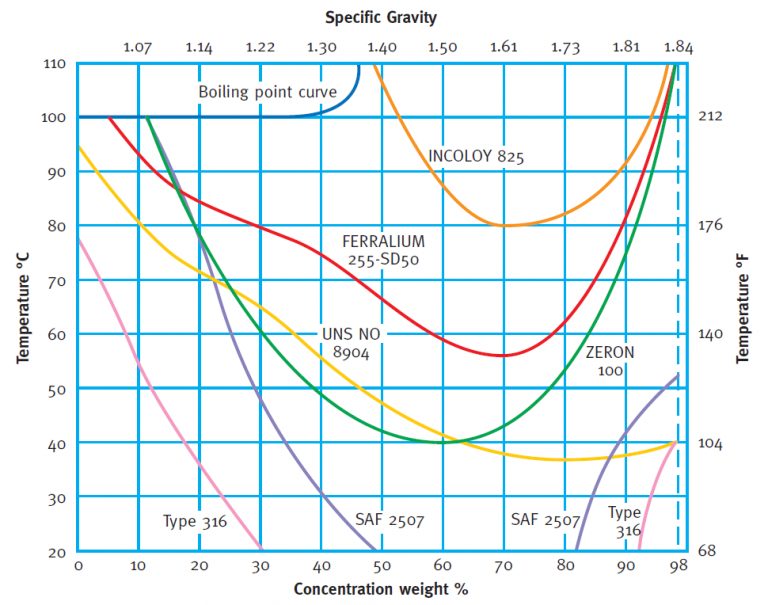 As demonstrated above, the use of Ferralium is well-established in this application, as its high copper content compared with other duplex and super duplex grades improves corrosion resistance in sulphuric acid. It has been shown to outperform 904L (UNS N80904) in most areas of the phosphoric manufacturing process and as it is of a much lower nickel content it offers a very cost effective solution.

For such tanks, the higher mechanical properties of Ferralium can result in material savings by reducing the wall thickness by up to 25% compared with lower grade stainless steels, which can also simplify and speed-up the welding operation.

Other applications have included:

However, the layout or local conditions of specific plants means that these materials (or duplex stainless steels) are not suitable. Langley Alloys carry Ferralium pipe and associated fittings in stock to meet immediate requirements. 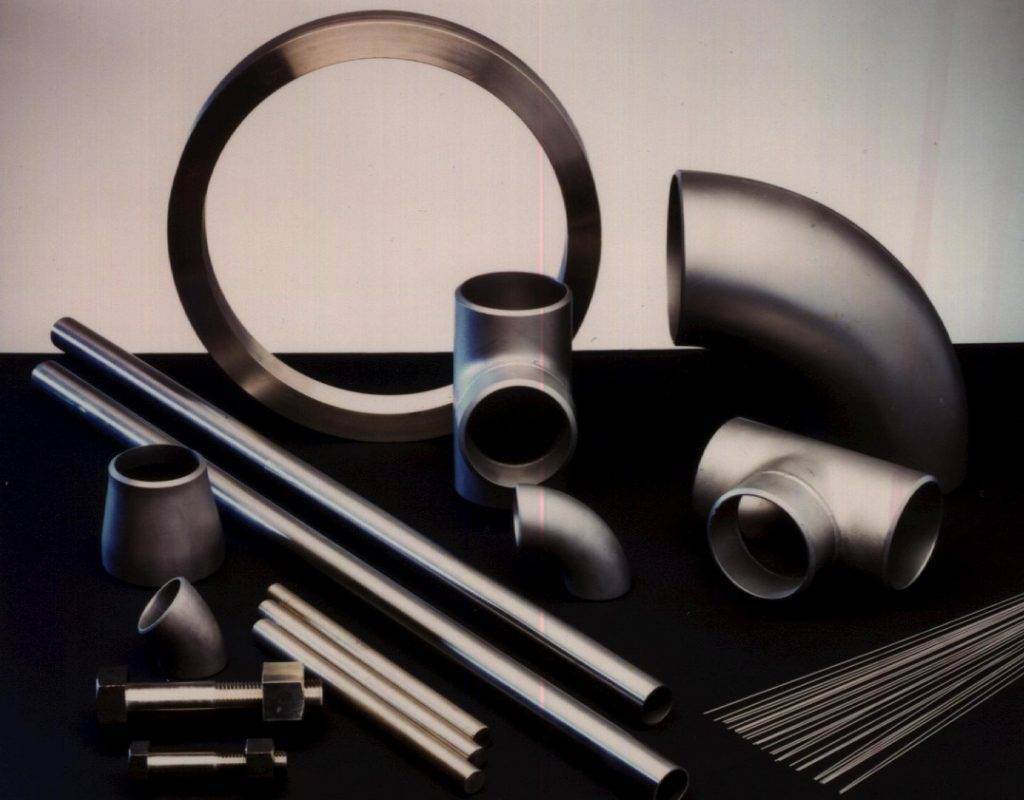 Whilst 25% Cr super duplex stainless steel meets most material requirements for successful phosphoric acid production there are occasional instances where more expensive materials such as nickel based alloys have to be deployed such as areas of plant where high concentrations of hydroflousilisic acid or hydrofluoric acid are experienced (options include UNS N08031, UNS N08028, UNS N06030 and UNS N08926).