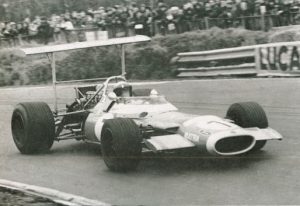 In recent years British engine racing cars and British drivers have virtually swept the board in Formula 1 and 2 racing events. Of the eleven international grand prix races in 1969, all first three places in each event were taken by Cosworth-Ford engine cars except for the third places in the Dutch and American Grand Prix, and Cosworth-Ford engine cars have been equally successful in Formula 2 races.

These are remarkable achievements for in the Formula 1 races, for instance, Cosworth engines of only 3 litres produced some 400BHP, and in a Grand Prix of around 300 miles, these engines worked at nearly maximum output for most of the race. Only the finest workmanship and material could have survived such a concentrated stressing, and every component part must be capable of completely reliable performance under these most arduous conditions.

Cosworth Engines Ltd. have chosen Hiduron bronze for the valve seat inserts and Hidurel 5 (UNS C64711, DIN 2.0855, DTD 498) for the valve guides. Both materials were successful in the high-performance engines.

The success of Hiduron 130 1 is due to its ability to maintain an effective and reliable seat face over long periods whilst subject to severe oxidation from hot corrosive exhaust gases, and to the continuous hammering action of the valves. This behaviour results from the alloy’s good resistance to oxidation, corrosion and wear. Other factors include high thermal conductivity which by assisting in the more efficient dissipation of heat helps to lower operating temperatures, and a high co-efficient of expansion which is particularly well suited for use with aluminium cylinder heads.

Hidurel 5 possesses many of these qualities and has good anti-frictional properties essential in valve guide material. It can be said therefore, that Langley materials play an important role in the success of British racing today, since Hidurel 5 has been used in Cosworth engines fitted to many of the cars made by such firms as Lotus, McLaren, Matra and Brabham.

If you’d like more information regarding Hidurel 5, please get in touch with a member our expert team today.