Steel specialist Langley Alloys on the up after £2m investment

Steel specialist Langley Alloys on the up after £2m investment 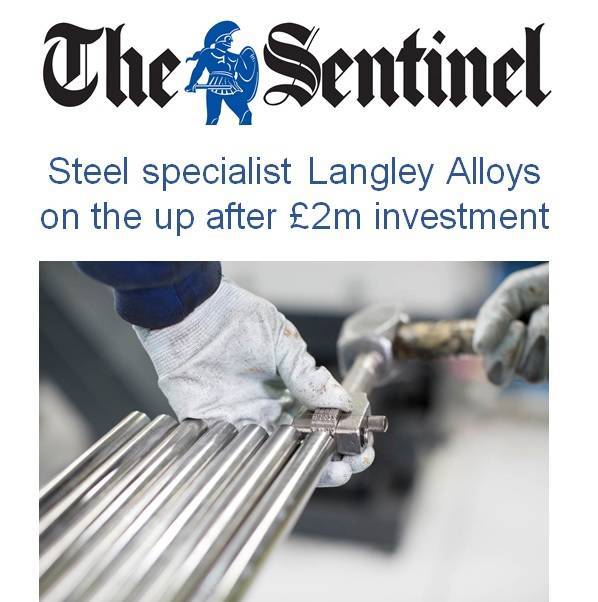 The Wolstanton business hopes to reach a record turnover of more than £14 million for 2018/19.

Global steel supplier Langley Alloys is well on the road to recovery – thanks to a multi-million pound investment over the last two years.

Bosses at the Wolstanton business have spent more than £2 million on new equipment and stock, as well as the opening of a second facility in Grove Road, Fenton. Now the company expects to post a record turnover of more than £14 million for 2018/19, after seeing sales increase 30 per cent in each of the last two years. This comes just four years after the firm saw revenue fall to its lowest of around £6 million due to a drop in oil prices in 2014/15.

Business development director Rodney Rice said: “We have invested around £2 million in new equipment and stock and have expanded both our sales and operations teams to meet demand. “Our latest sales plan would see us break our previous best year, and we are well-placed to achieve that given the investments in people, equipment and supplier partnerships.” As well as the cash injection, Langley Alloys has introduced two shifts at its Wolstanton site to allow it to increase capacity and capability – this is in addition to the opening of its second site. It has also worked hard to form new strategic partnerships with suppliers, most recently becoming the UK distribution partner for Sandvik.

In the short-term, Langley Alloys plans to take on new staff, including warehouse operatives and an apprentice sales assistant. But eventually it hopes to bring all of its operations under one roof and relocate to a bigger site. Rodney, who joined the business two years ago from Tata Steel, added: “We are investing because we are getting busier, and I don’t see why this momentum won’t continue. “We want to optimise the space we have at the moment so we can continue to grow, but we will eventually get to the point where we have outgrown both our North Staffordshire sites. We just want to get ahead and make sure we are ready. The market is buoyant and business is going well.”

Langley Alloys supplies high-value stainless steels and nickel alloys to companies producing products destined for application in oil and gas, chemical, food, paper and energy production, as well as marine and naval uses. The company employs more than 45 staff at its sites in the UK and USA, and exports all over the world.

Managing director Chris Halliday said: “Our success over the last few years has been down to real investment in quality people. “We have put a new management team together, we have invested in new kit, and we have also formed new strategic partnerships, so there are a lot of opportunities for us.”