Copper Alloys from our archives

Copper Alloys from our archives 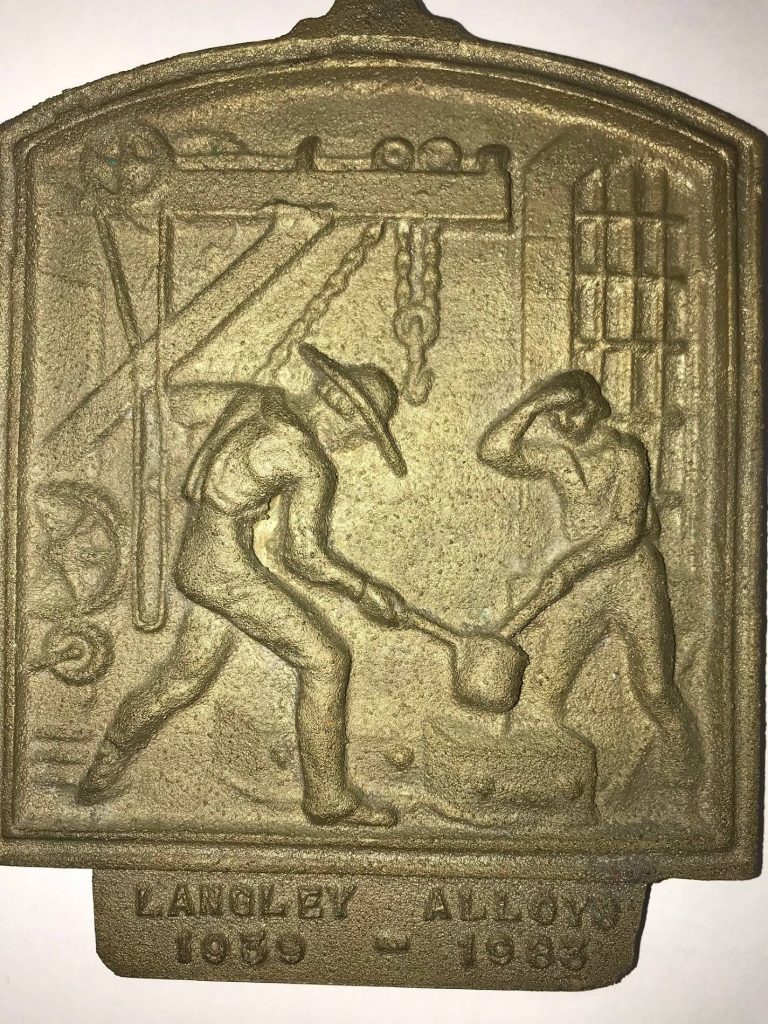 Langley Alloys history can be traced back as far as 1938, and in those early years is heavily linked to the development of novel copper alloys.

Another item from our archives appeared in the office this week – a commemorative plaque cast in our own foundry in 1978. The dates on the plaque related to the creation of the business in 1938, and the subsequent relocation of the foundry in 1978, some 45 years later. Whilst we are no longer melting and casting on our site in Newcastle under Lyme, following the break-up of the original business, that history is still around us.

A number of copper alloys, invented and promoted by Langley Alloys during this period are still commercially successful. These include:

Langley Alloys developed a family of alloys under the Hidurax name, which was originally trademarked in 1939. Hidurax Special was the original name for Hiduron 130. It was specifically developed as a high-strength, corrosion-resistant alloy for naval applications such as seals, shafts, control planes for submarines, winch components. However, more industrial rather than naval applications tend to dominate these days. The Hiduron trademark was registered in 1966 and Hidurax Special then became known as Hiduron 130.

Being a cupronickel, it has excellent resistance to corrosion by seawater and marine and industrial atmospheres and it is highly resistant to crevice corrosion. It has a very low magnetic permeability, it is virtually non-magnetic, and it has a higher modulus of elasticity than is normally associated with copper alloys. All these properties are achieved without heat treatment and are combined with good machinability and the ability to take an excellent finish.

The major use of Hiduron 130 these days is in sub-sea hydraulic and electrical connectors such as flying lead connectors for stab plates. It is also used in naval winches, seawater valves and marine engineering generally. Additionally, it is applied in the aerospace industry for heavily stressed airframe components. Other applications include a variety of mechanical engineering and hydraulics systems amongst which are valve seat inserts and thrust washers for high-performance internal combustion engines. It is covered by the specifications DIN 2.1504 and DTD 900/4805 to which it can be supplied when required.

Hiduron 191 was developed to provide both the corrosion resistance and anti-fouling characteristics of conventional cupronickels but with superior tensile and toughness properties compared to aluminium bronzes. Its resistance to marine corrosion is comparable with that of conventional cupronickels, the combination of tensile strength and toughness is far superior to that available with aluminium bronzes and its properties are largely independent of section size. In addition, Hiduron 191 has the relatively high modulus of elasticity of a cupronickel compared with most other bronzes.

Hidurel 5® (DTD498, UNS C64700, 2.0855) is a precipitation-hardening copper-nickel-silicon alloy possessing high electrical and thermal conductivity with very good notch ductility and high mechanical strength. Despite its high strength, the alloy is resistant to hydrogen embrittlement. Resistance to corrosion under marine and industrial conditions is excellent and the alloy has good anti-frictional and bearing properties. With a magnetic permeability of less than 1.001, the alloy is essentially non-magnetic. It was one of the original alloys developed for their bearing properties.

Hidurel 5 meets the mechanical and chemical properties of DTD 498, BS 4577 Type A3/2 and Rolls Royce MSRR 8501 to which Langley Alloys regularly supply so can, therefore, be specified in confidence for high integrity components. Cold worked material to DTD 504 can also be supplied to order.

Get in Touch for More Information

If you have any questions about copper alloys, please contact us for more information.