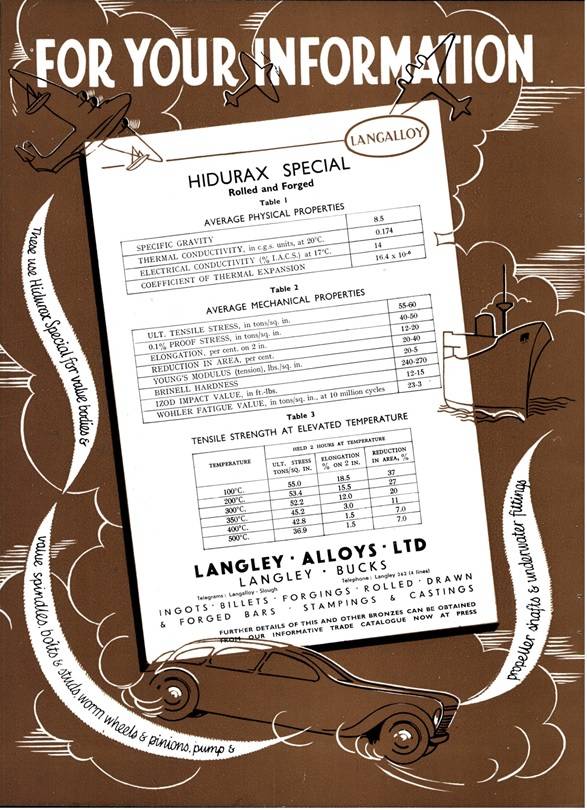 Copper has many desirable physical properties, such as excellent thermal and electrical conductivity, plus strong corrosion resistance in marine and selected chemical environments. In its unalloyed form, mechanical properties are not particularly high. However, it is readily alloyed with numerous other metals to greatly improve the level of strength achievable.

Nickel and copper can be readily alloyed in any combination between 0-100% of either metal. The most straightforward copper-nickel alloys contain around 10% nickel content, which increases the strength, abrasion and galling resistance of copper, whilst maintaining the high inherent resistance to biofouling.

The very first high-strength copper-nickel alloys were developed in the 1930s, utilising an addition of aluminium to create a fine precipitate that improves yield strength. This approach was optimised by Langley Alloys, with several new alloys originally developed under the Hidurax name, from 1939 onwards.

Hiduron 130 was originally known as Hidurax Special, and it was specifically developed as a high-strength, corrosion-resistant alloy for naval applications such as seals, shafts, control planes for submarines and winch components. Aluminium is the key strengthening element for Hiduron 130 (2.1504, DTD 900/4805, C72400, Cuni14Al3) through the formation of finely dispersed ϒ’ nickel aluminium precipitate, strengthening the alloy in a similar way to Alloy K-500. As these precipitates are formed through a carefully controlled forging process, naturally aged during cooling, no further heat treatment is necessary, making it one of the highest strength copper alloys commercially available.

Hiduron 191 (DEF STAN 02-835, NES 835, DOD-C-24676, EB4223A, UNS C72420) was developed in the 1960’s as a complementary alloy to Hiduron 130 to improve the level of impact toughness. This is achieved by adding up to 4.5% manganese to increase the amount of solid-solution strengthening, whilst moderating the amount of aluminium and therefore the full extent of precipitation strengthening. The improvement in impact strength is associated with a decrease in the yield strength as a consequence.

The development of offshore oil and gas exploration has led to Hiduron 130 finding applications beyond the original naval (and aerospace) applications. High strength and resistance to fouling are obviously of benefit in subsea applications, but the galling resistance has been particular relevant in subsea connectors and stab plates. Metal components in contact with each other for extended periods can be subject to galling, where the surfaces micro-weld at high-points on the surface due to the influence of load and time. The components can then either seize or suffer damage when attempting to disconnect or actuate them. The physical and mechanical properties of Hiduron 130, together with its resistance to fouling, make it well-suited to wet-mate electrical and hydraulic connectors which need to operate for extended periods before requiring immediate and safe disconnection.

Given the success of Hiduron, the basic composition of this unique alloy has been exploited by other manufacturers once the original Langley Alloys patent lapsed. Other alloys that meet the generic DIN 2.1504 caption include Nibron Special by Columbia Metals, Hardibron by Lebronze Alloys and CAL T-100 by Copper Alloys.

The broad selection of useful properties make Hiduron copper nickel alloys difficult to better. Where high-strength is a requirement, then copper beryllium alloys have been used (for instance C17200, C17300 and C17400). However, the inhalation of dust or fume generated during the machining and fabrication of copper beryllium (CuBe) alloys can lead to serious lung conditions. Therefore, it has fallen from popularity in recent years.

Another more recent family of copper-based alloys of interest is based upon copper-nickel with additions of tin. These copper-based spinodal alloys, exploit an unusual metallurgical feature to achieve very high levels of strength. The forged bar is subjected to age-hardening, which encourages a form of chemical segregation called ‘spinodal decomposition’, whereby two new phases form. Alloys such as Toughmet 3 (C72900) by Materion Corporation are included as alternatives to Hiduron 130 by some OEMs, although this product is appreciably more expensive.

Despite having been developed more than 70 years ago, the Hiduron range of alloys, including Hiduron 130 and Hiduron 190, have provided market-leading levels of performance. The unique combination of physical and mechanical properties is unrivalled.

Hiduron is a registered trademark of Langley Alloys Ltd.

Nibron Special is a registered trademark of Columbia Metals Ltd.

CAL T-100 is a registered trademark of Copper Alloys Ltd.

Toughmet is a registered trademark of Materion Corporation.